These architects share a business, a street, and a design sensibility that adapts to their clients’ needs

by Margaret Williams
Photographs by Holly Cowart and Casey Woods

ADA CORRAL AND CAMILLE JOBE, principals and co-founders of Jobe Corral Architects, describe their neighboring homes as the Twin Houses. The two homes do in fact have quite a lot in common: Set just a few houses apart on the same street, both are low-slung one-story concrete block homes that have natural light streaming through their original casement windows. So, yes, there are similarities, but as with any space the details reveal a fuller picture.

Jobe, a Corpus Christi native who has been a practicing architect for 20 years, is an avid cook whose kitchen is not only the centerpiece of the house but also the bridge that connects the home’s original footprint to its later addition. Corral, a graduate from the University of Texas’ architecture program and the mother of three young children (two of them twins), has created a home that skillfully surprises. Upon first entering Corral’s home, the 1940s outline seems unchanged, but a turn past the kitchen and dining room reveals an entirely new space centered around a play space for her children and a master suite for her and her husband.

In fact both homes were so thoughtfully adapted that the Twin Houses recently received a Preservation Austin addition award. It makes sense that these homes, set in the Delwood neighborhood, speak volumes about the type of architects Jobe and Corral are, since they are also the way they met and became friends and, eventually, business partners. “A lot of people can’t see what they can do with these little houses,” Corral explains. Jobe follows, saying, “Our houses can be an example of how to do it … you don’t have to demolish them.”

The AIA-certified architects, whose work ranges from an entirely new and modern build in South Austin, to an inventive and playful treehouse, to the upcoming and most recent Lady Bird Lake restroom project, want to offer their clients solutions for the way they really live, whatever that means. We sat down with the architects and friends to find out how exactly they met, what their relationship means for both their work and their families, and what projects the women have on their horizon.

When and how did you two meet? Were you really neighbors first?

CORRAL: We met in the neighborhood after a colleague told me about this other architect that lived down the street. Later Patton [Jobe’s youngest son] and Orlando [Corral’s oldest child] were in preschool together. I reached out to Camille in 2012, soon after starting my business, because I needed help with the business side of things. Camille had wanted someone to discuss ideas with also. We had both found it difficult to work in isolation, so we started having coffee and helping each other out. That eventually led to finding office space together and more collaboration that later turned into officially merging our businesses five years ago.

JOBE: That pretty much covers it!

How did you decide to start a business together? Pros and cons to living next door to your friend and business partner.

JOBE: We are both very pro-collaboration. We have a list of ideas that we wrote up soon after deciding to join forces, and one thing stuck out: “Collaboration is not about gluing together existing egos. It’s about the ideas that never existed until everyone entered the room.”

We are the organizers of the team, the coordinators of the work, and the grease that keeps the wheels turning. It means a better product in the end.

CORRAL: Early on we discovered that we had very similar design sensibilities but very different skill sets. Discussing projects, running ideas by each other, and combining our different areas of expertise made all our projects stronger. It was also easier to start hiring people and growing our business by sharing the expenses and responsibilities. In fact our first employee, Sarah Hafley, who is still working with us, worked for both of our separate companies before we were officially Jobe Corral Architects.

But since we are neighbors we try to strike a balance between the personal and the professional. We spend a lot of time together but also are respectful of each other’s own time. Our kids have sleepovers, Halloween is at Camille’s house, and New Year’s Eve is at mine. And we can just walk down the street if we need a quick after-hours meeting.

What drew you to your home and the Delwood neighborhood?

CORRAL: We loved our neighborhood as soon as we first drove in. There are huge trees framing the entrance, and the houses are very simple. A clean canvas is an architect’s dream. I grew up in Puerto Rico, where most construction is made out of concrete blocks, so finding a concrete block house felt like home.

JOBE: Simple, clean lines — the steel windows and lack of trim details were very appealing. The location was also a big selling point, since I spend a lot of time at the Waller Creek Boathouse and I needed to be close. Almost all of the homes in the neighborhood are one-story concrete block houses, usually around 1,000 square feet, with stucco on the interior, the exterior, and the ceilings.

How have you adapted your home through the years?

CORRAL: Our house was great for Matthew [Corral’s husband] and I before we had kids, and even with one kid, but the two bedrooms and one bathroom quickly became too small after the twins came along. First we renovated the original part of the home, which included uncovering and restoring the original parquet floors, resurfacing the fireplace, and remodeling the kitchen and bathroom. Once we could no longer handle one bathroom for five people, we finalized our plans for an addition that had been in progress for a decade. Ten years after we purchased the house, in 2005, we broke ground. We love that we were able to maintain the character of the old house, with a modest addition that fits our needs, that is in keeping with the character of the neighborhood.

JOBE: The houses were all built in the 1940s. People lived very differently back then. Our house didn’t originally have a dining area outside of the kitchen, the kitchen was very small, and there wasn’t a connection to the backyard from the living spaces. The only back door went through the garage. When we did our addition, it was all about making the house livable for a modern family without destroying the character of the house and the neighborhood.

How does the way you live inform your design for clients’ homes?

CORRAL: Having gone through the process of adding to and renovating our own homes allows us to better speak to our clients about the process, the things that worked and even the things we regret or wished we had done differently.

In terms of design, we really want the way our clients live, rather than the way we live, to inform the design of their home. We want to offer the solution for the way they want to live.

JOBE: Because we are always working on the homes and workplaces of others, we are always observing, critiquing, and analyzing. We are always looking for better ways to design for the way our clients want to live. My husband and I, and our whole family, love to cook and entertain. Those experiences inform my design.

What projects are you working on currently? Anything especially exciting or challenging you can share?

JOBE: We are very excited to be working on a restroom project along the Butler Trail on Lady Bird Lake. Our clients are The Trail Foundation and The Parks and Recreation Department. It is the fourth restroom on the series, but the first one on the East Side, and the first by a women-owned firm. These are all unique and sculptural projects and on a very beautiful site. Ours will be on Festival Beach. The schematic design was just revealed to the public, and construction should start in early 2019.

CORRAL: We are reinterpreting the materials of an existing old restroom on the site that the neighbors are fond of, and we will have a colorful, undulating glazed-tile roof, which allows for wind and light to move through the building. It is both exciting and a challenge to have basically all of Austin as our potential end user. We get to design something that will be used by the Austin community and contribute to our city.

This interview has been edited and condensed for clarity. 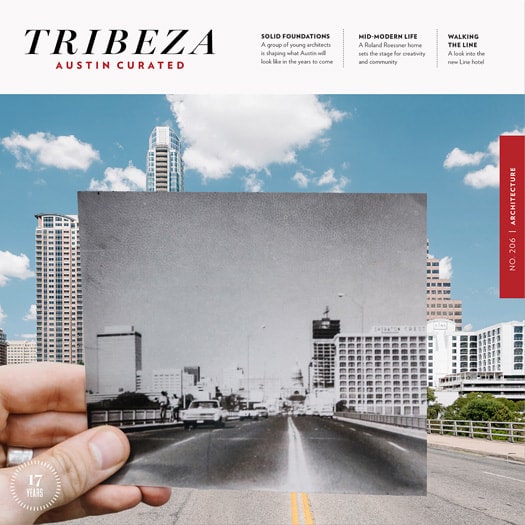 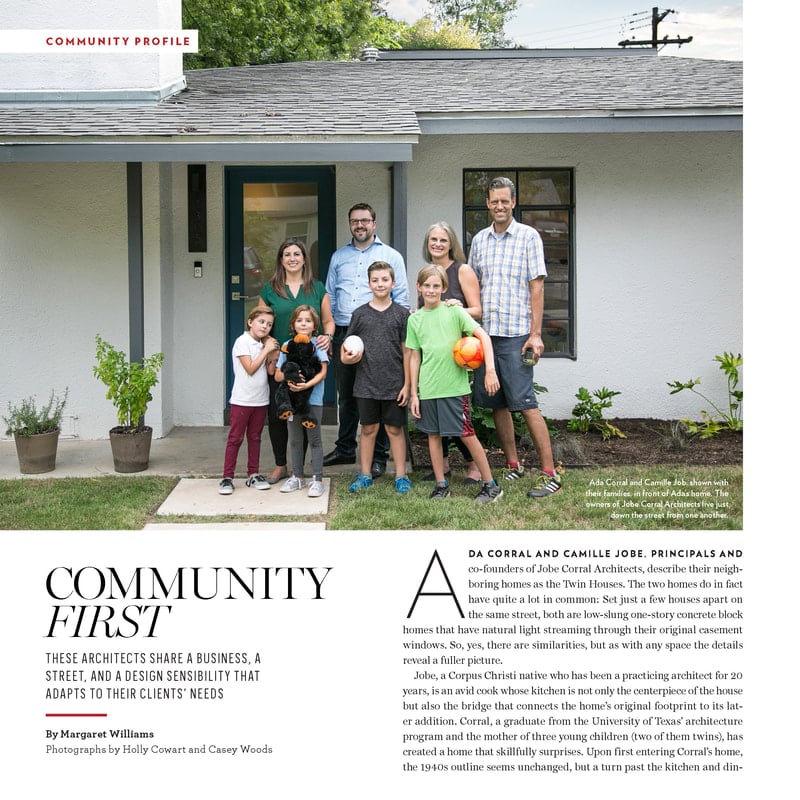 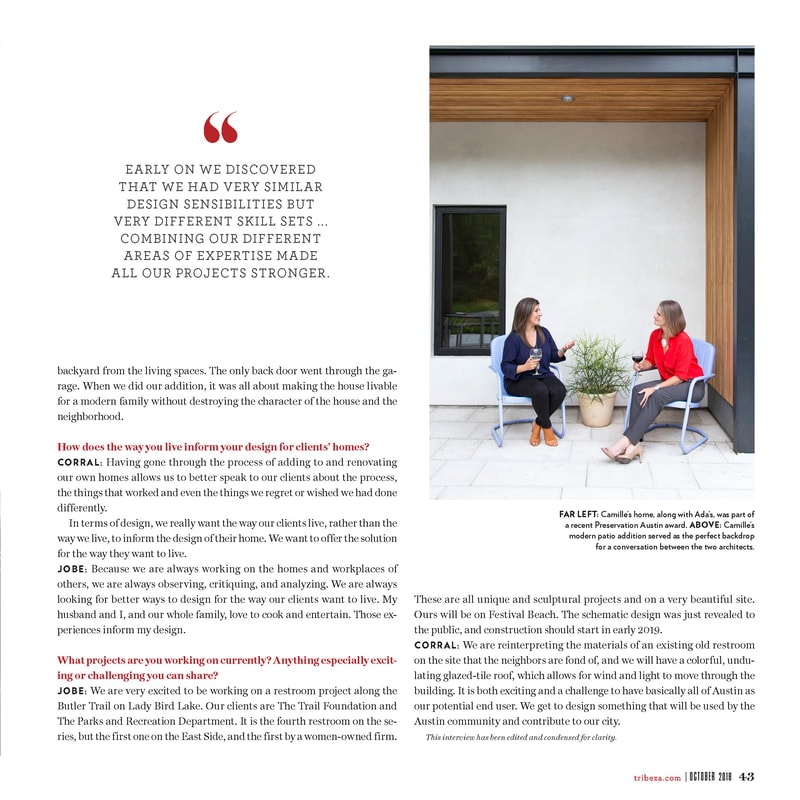