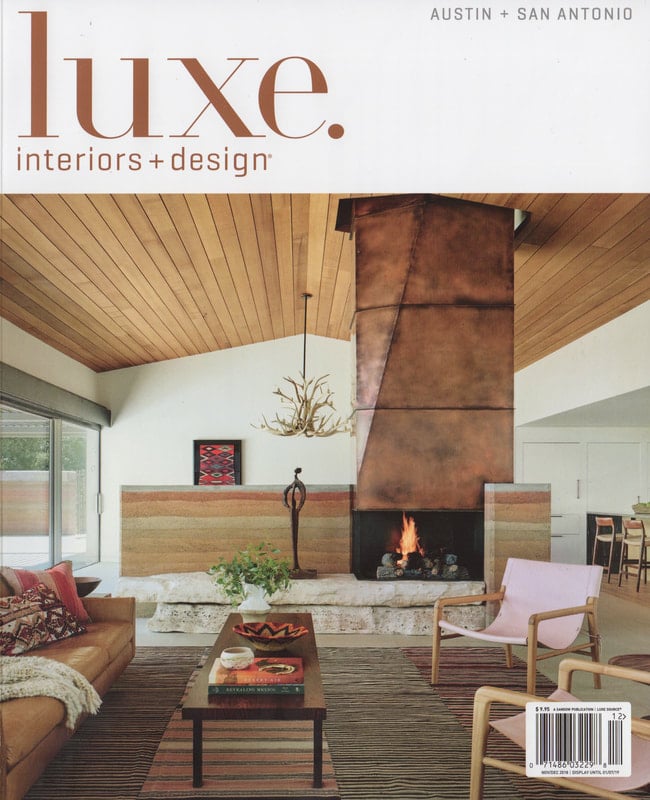 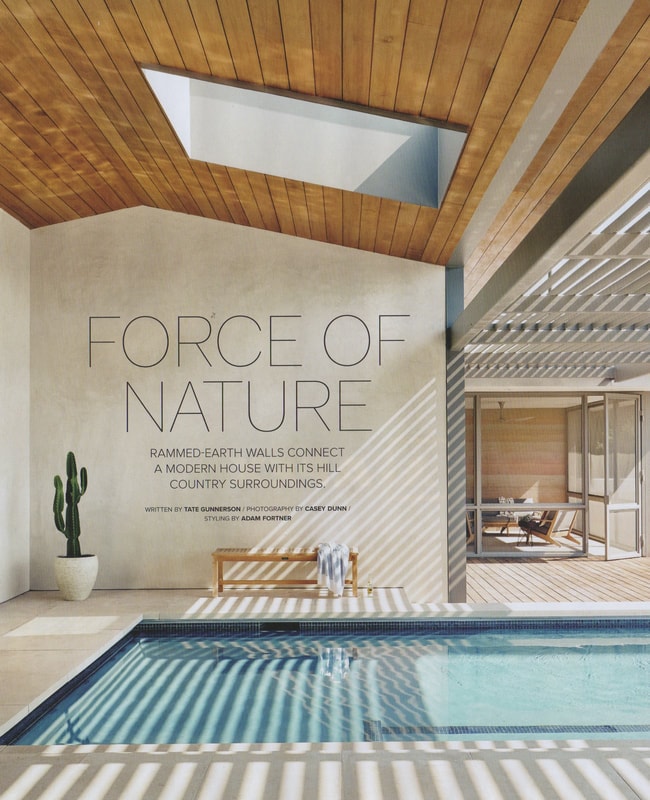 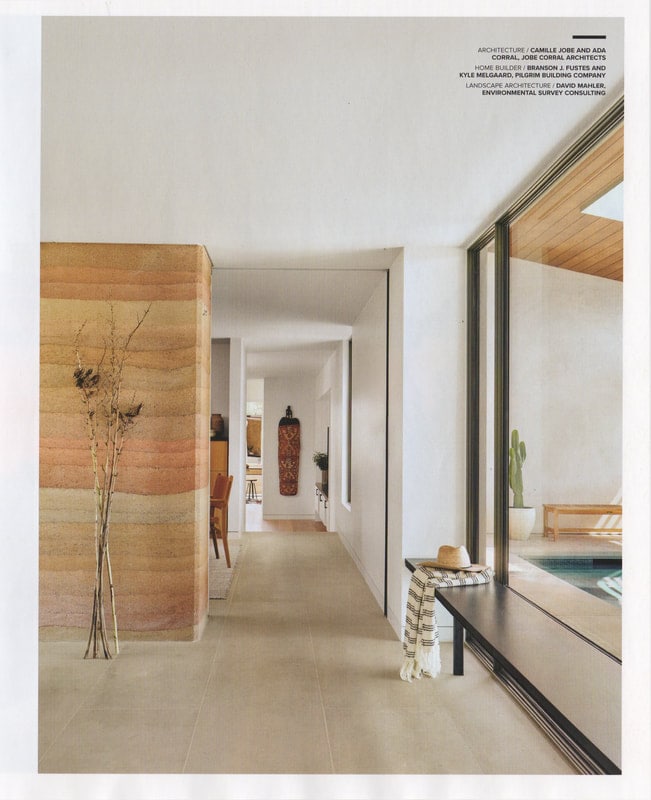 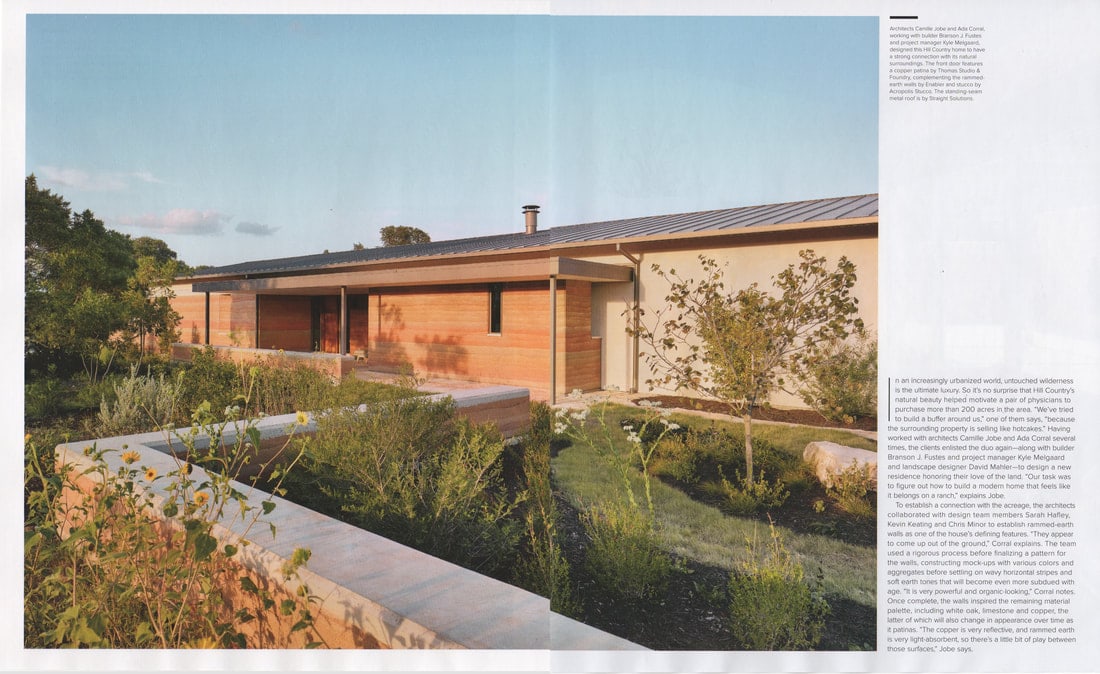 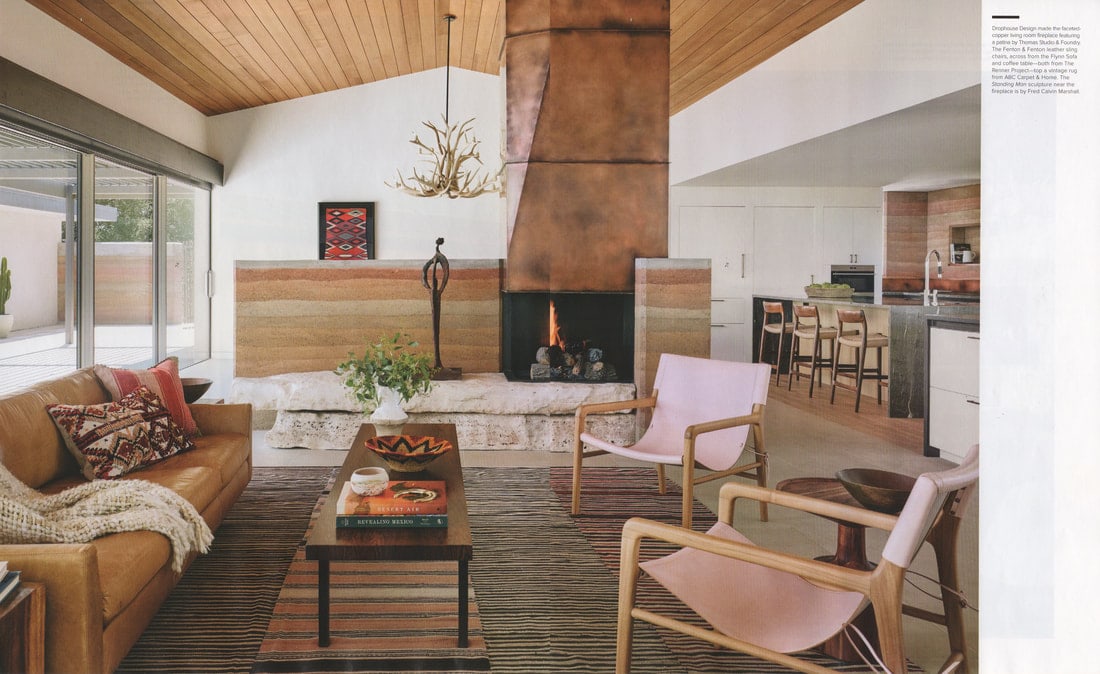 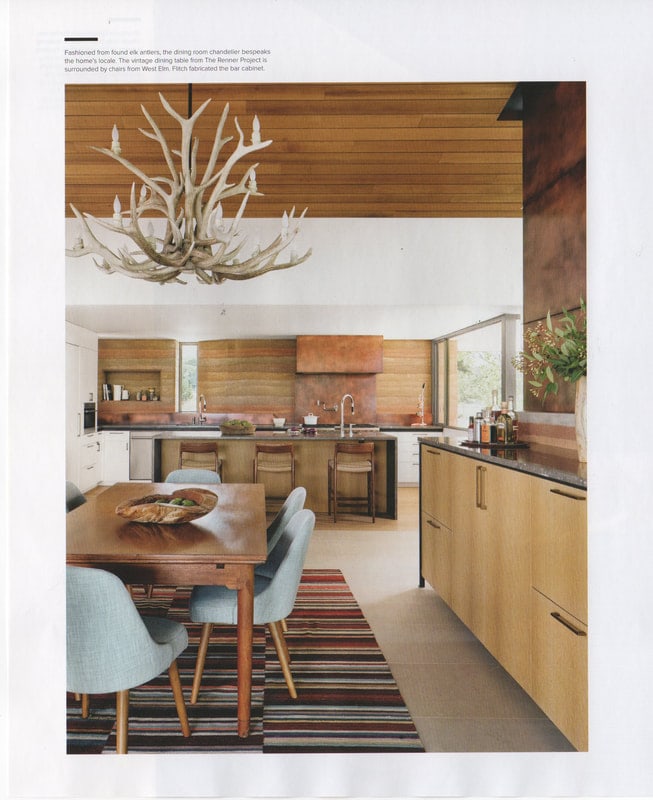 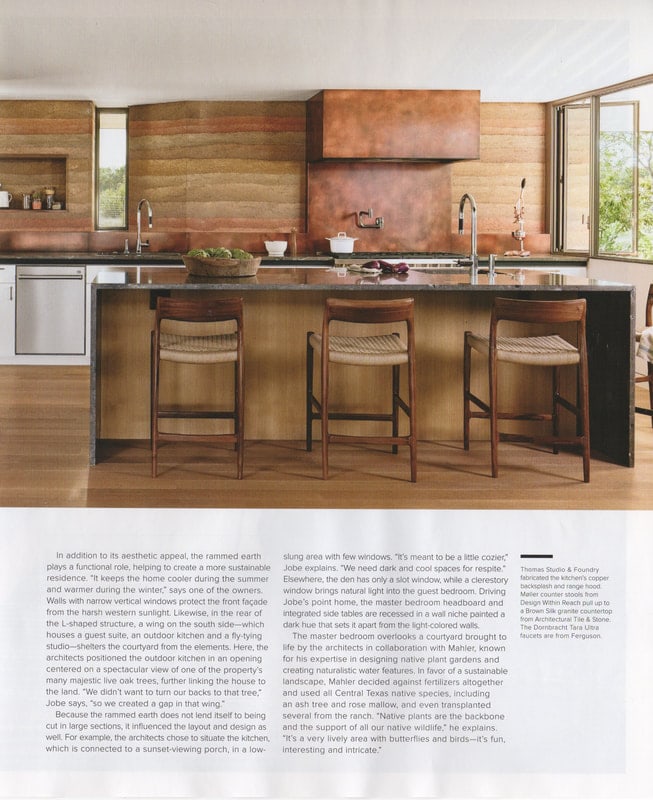 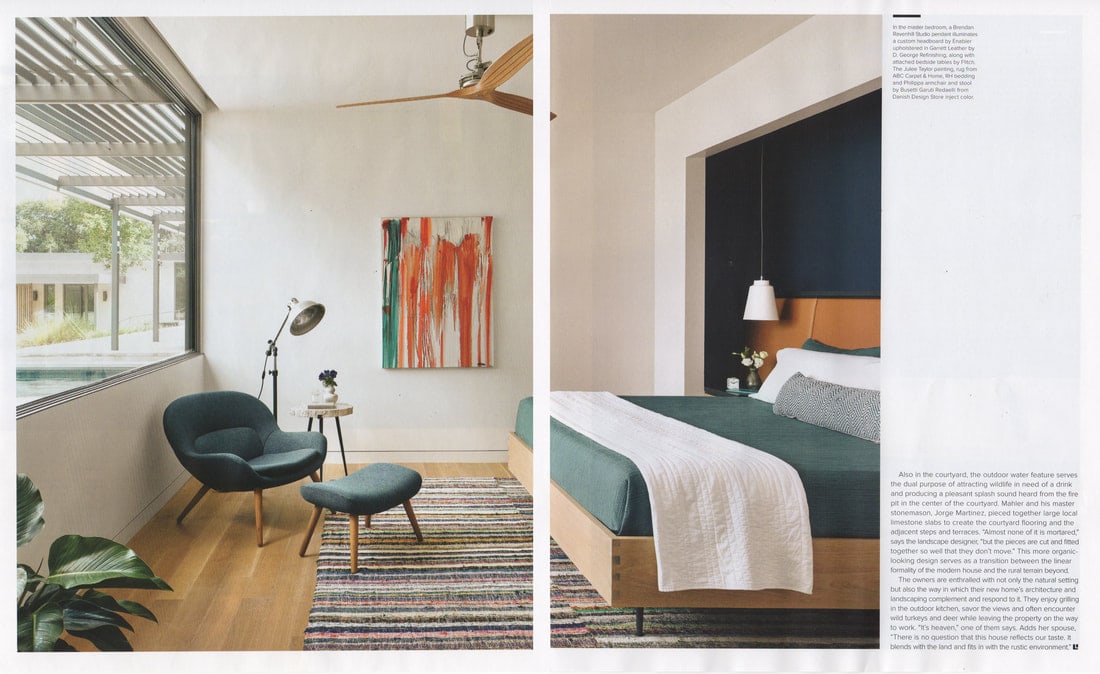 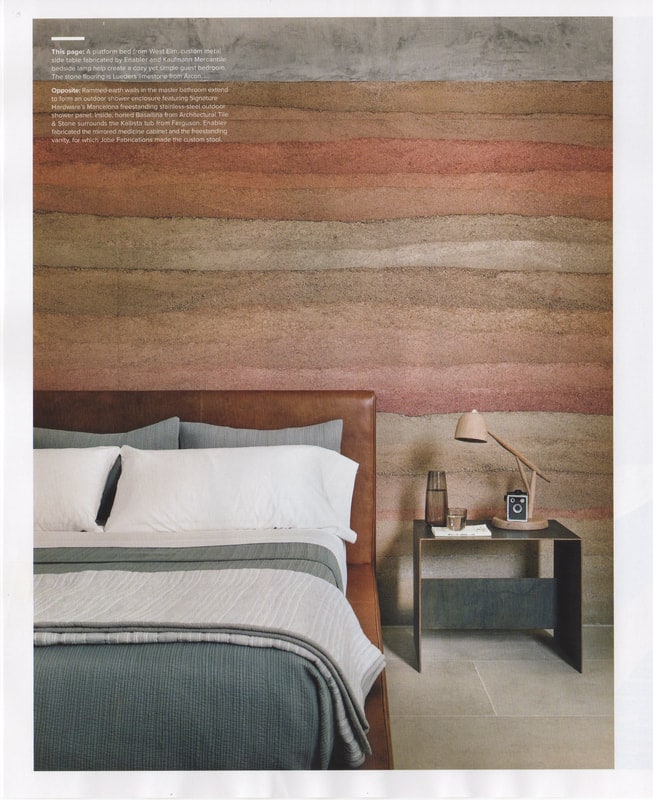 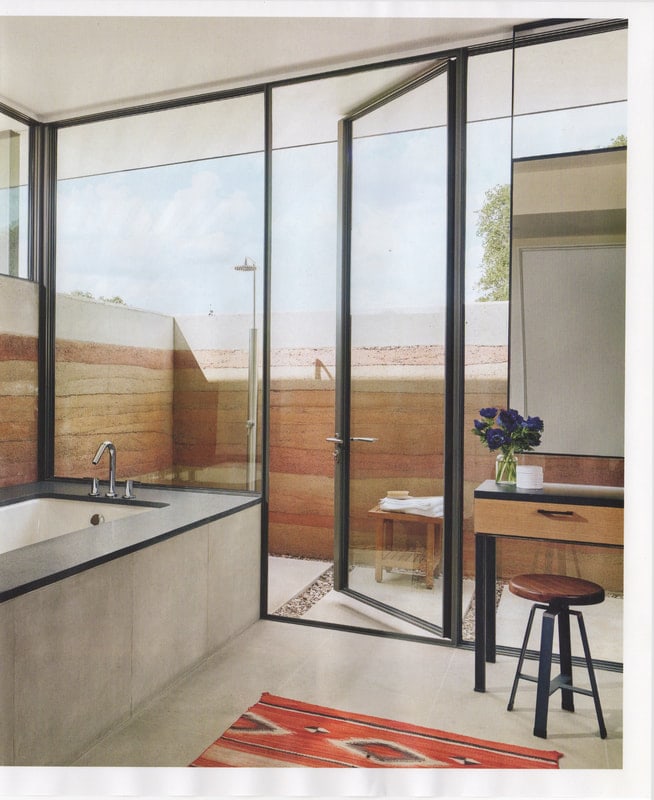 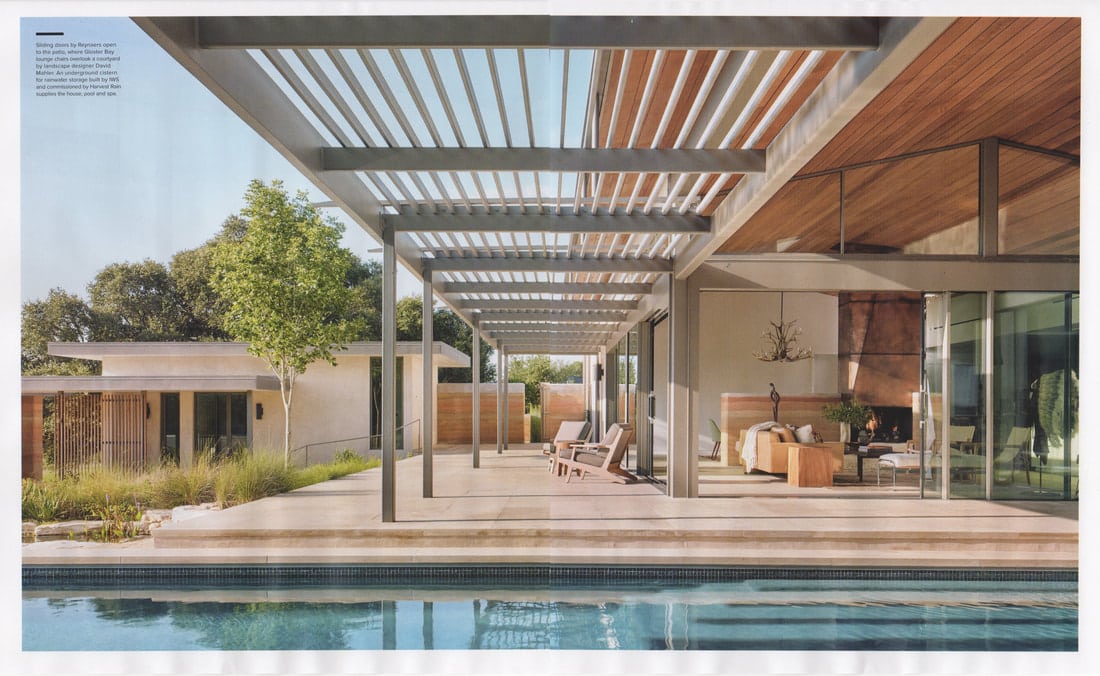 In an increasingly urbanized world, untouched wilderness is the ultimate luxury. So it’s no surprise that the natural beauty of Texas’ Hill Country helped motivate a pair of physicians to purchase more than 200 acres in the area. “We’ve tried to build a buffer around us,” one of them says, “because the surrounding property is selling like hotcakes.” Having worked with architects Camille Jobe and Ada Corral several times, the clients enlisted the duo again–along with builder Branson J. Fustes and project manager Kyle Melgaard and landscape designer David Mahler–to design a new residence honoring their love of the land. “Our task was to figure out how to build a modern home that feels like it belongs on a ranch,” explains Jobe.

To establish a connection with the acreage, the architects collaborated with design team members Sarah Hafley, Kevin Keating and Chris Minor to establish rammed-earth walls as one of the house’s defining features. “They appear to come up out of the ground,” Corral explains. The team used a rigorous process before finalizing a pattern for the walls, constructing mock-ups with various colors and aggregates before settling on wavy horizontal stripes and soft earth tones that will become even more subdued with age. “It is very powerful and organic-looking,” Corral notes. Once complete, the walls inspired the remaining material palette, including white oak, limestone and copper, the latter of which will also change in appearance over time as it patinas. “The copper is very reflective, and rammed earth is very light-absorbent, so there’s a little bit of play between those surfaces,” Jobe says.

In addition to its aesthetic appeal, the rammed earth plays a functional role, helping to create a more sustainable residence. “It keeps the home cooler during the summer and warmer during the winter,” says one of the owners. Walls with narrow vertical windows protect the front façade from the harsh western sunlight. Likewise, in the rear of the L-shaped structure, a wing on the south side–which houses a guest suite, an outdoor kitchen and a fly-tying studio–shelters the courtyard from the elements. Here, the architects positioned the outdoor kitchen in an opening centered on a spectacular view of one of the property’s many majestic live oak trees, further linking the house to the land. “We didn’t want to turn our backs to that tree,” Jobe says, “so we created a gap in that wing.”

Because the rammed earth does not lend itself to being cut in large sections, it influenced the layout and design as well. For example, the architects chose to situate the kitchen, which is connected to a sunset-viewing porch, in a low-slung area with few windows. “It’s meant to be a little cozier,” Jobe explains. “We need dark and cool spaces for respite.” Elsewhere, the den has only a slot window, while a clerestory window brings natural light into the guest bedroom. Driving Jobe’s point home, the master bedroom headboard and integrated side tables are recessed in a wall niche painted a dark hue that sets it apart from the light-colored walls.

The master bedroom overlooks a courtyard brought to life by the architects in collaboration with Mahler, known for his expertise in designing native plant gardens and creating naturalistic water features. In favor of a sustainable landscape, Mahler decided against fertilizers altogether and used all Central Texas native species, including an ash tree and rose mallow, and even transplanted several from the ranch. “Native plants are the backbone and the support of all our native wildlife,” he explains. “It’s a very lively area with butterflies and birds–it’s fun, interesting and intricate.”

Also in the courtyard, the outdoor water feature serves the dual purpose of attracting wildlife in need of a drink and producing a pleasant splash sound heard from the fire pit in the center of the courtyard. Mahler and his master stonemason, Jorge Martinez, pieced together large local limestone slabs to create the courtyard flooring and the adjacent steps and terraces. “Almost none of it is mortared,” says the landscape designer, “but the pieces are cut and fitted together so well that they don’t move.” This more organic-looking design serves as a transition between the linear formality of the modern house and the rural terrain beyond.

The owners are enthralled with not only the natural setting but also the way in which their new home’s architecture and landscaping complement and respond to it. They enjoy grilling in the outdoor kitchen, savor the views and often encounter wild turkeys and deer while leaving the property on the way to work. “It’s heaven,” one of them says. Adds her spouse, “There is no question that this house reflects our taste. It blends with the land and fits in with the rustic environment.”