One Vision, Two Minds, a Multitude of Homes 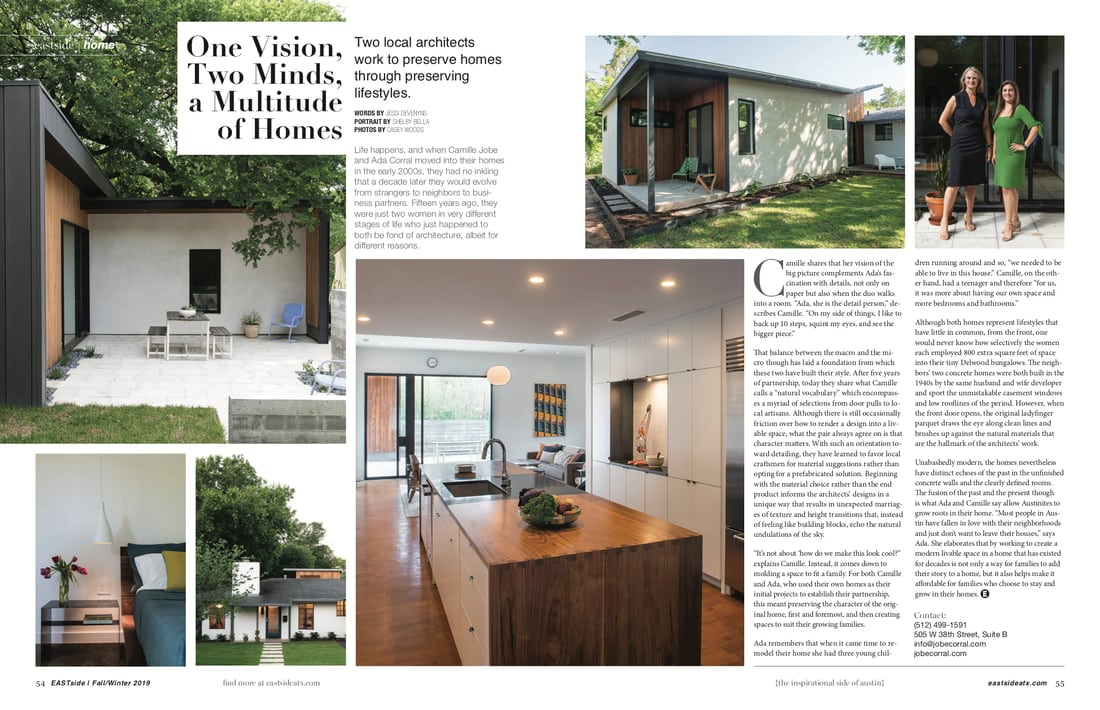 Life ha ppens, and when Camille Jobe and Ada Corral moved into their homes in the early 2000s, they had no inkling that a decade later they would evolve from strangers to neighbors to business partners. Fifteen years ago, they were just two women in very different stages of life who just happened to both be fond of architecture, albeit for different reasons.
Camille shares that her vision of the big picture complements Ada’s fascination with details, not only on paper but also when the duo walks into a room. “Ada, she is the detail person,” describes Camille. “On my side of things, I like to back up 10 steps, squint my eyes, and see the bigger piece.”

That balance between the macro and the micro though has laid a foundation from which these two have built their style. After five years of partnership, today they share what Camille calls a “natural vocabulary” which encompasses a myriad of selections from door pulls to local artisans. Although there is still occasionally friction over how to render a design into a livable space, what the pair always agree on is that character matters. With such an orientation toward detailing, they have learned to favor local craftsmen for material suggestions rather than opting for a prefabricated solution. Beginning with the material choice rather than the end product informs the architects’ designs in a unique way that results in unexpected marriages of texture and height transitions that, instead of feeling like building blocks, echo the natural undulations of the sky.

“It’s not about ‘how do we make this look cool?” explains Camille. Instead, it comes down to molding a space to fit a family. For both Camille and Ada, who used their own homes as their initial projects to establish their partnership, this meant preserving the character of the original home, first and foremost, and then creating spaces to suit their growing families.

Ada remembers that when it came time to remodel their home she had three young children running around and so, “we needed to be able to live in this house.” Camille, on the other hand, had a teenager and therefore “for us, it was more about having our own space and more bedrooms and bathrooms.”

Although both homes represent lifestyles that have little in common, from the front, one would never know how selectively the women each employed 800 extra square feet of space into their tiny Delwood bungalows. The neighbors’ two concrete homes were both built in the 1940s by the same husband and wife developer and sport the unmistakable casement windows and low rooflines of the period. However, when the front door opens, the original ladyfinger parquet draws the eye along clean lines and brushes up against the natural materials that are the hallmark of the architects’ work.

Unabashedly modern, the homes nevertheless have distinct echoes of the past in the unfinished concrete walls and the clearly defined rooms. The fusion of the past and the present though is what Ada and Camille say allow Austinites to grow roots in their home. “Most people in Austin have fallen in love with their neighborhoods and just don’t want to leave their houses,” says Ada. She elaborates that by working to create a modern livable space in a home that has existed for decades is not only a way for families to add their story to a home, but it also helps make it affordable for families who choose to stay and grow in their homes.

EASTside, “One Vision, Two Minds, a Multitude of Homes”, 2019
LINK TO ARTICLE+